Tenser’s Tirades reports from the crossroads of the Big Show floor as hundreds of attendees flow past. This year’s event boasted 37,000 registered attendees, 900 members of the media and more than 120 keynote, breakout, and vendor-sponsored educational sessions.

Topic: Our BrainTrust panelist, James Tenser, reports in from the floor of NRF’s Big Show and boils things down into three areas of innovation he’s seeing as most prevalent at the show. [13 minutes][Posted by RetailWire on Monday, January 14, 2019]

IN MY MEANDERS around the vibrant NRF Expo hall (#NRF12) in New York this month, I tried my best to spot the visible stars of the show and detect the invisible three-degree background radiation that lurks behind the retail firmament.

The atmosphere was energized, the crowds were large and buzzwords were flying. Shopper insights swirled in the cloud, mobile technology hype charged the atmosphere, and business intelligence oozed out of every software booth into glowing puddles on the Javits Center exhibit floor.

Ultimately there was too much for one greying, recovering journalist to absorb. This is surely why I wound up at the bar in Manhattan’s Landmark Tavern one evening with a group of senior retail business writers (a.k.a.,”ink-stained wretches”) who gather each year to drink beer and tell lies.

We talked about how NRF has become primarily a retail operations exhibition, and how that had evolved to be primarily about software solutions. Egged on by my fellowship of professional cynics and emboldened by many lagers and stouts, we began evaluating the first day’s bullshit quotient. The BSQ is a pretty simple ratio – buzzword repetition divided by genuine new ideas. (This is a party game only old journalists could love.)

The buzzwords were easy: “Insights” (every retail software solution promises better ones); “Analytics” (every retail software solutions promises faster ones); “Business Intelligence” (how every solution promises to deliver the insights and analytics); “Big Data” (what results from gathering so many insights and analytics); “Cloud” (the place in cyberspace where every vendor proposes to house its Big Data); “Dashboard” (a screen where retail practitioners are supposed to want to access their BI); and “Omni-Channel” (a state of retailing where online commerce coexists with mobile commerce and bricks & mortar, empowered by – you guessed it – insights, analytics, Big Data and BI).

As ever, the genuine new ideas were harder to detect. “Performance Management” may be a good one (the quaint notion that retailers might want to measure the outcomes of their insight-driven plans to see if they are really paying off). “Retail Industry Creates Jobs” is another, presented as a core theme by the NRF itself. 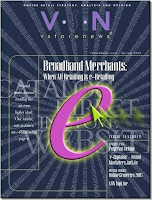 Readers familiar with basic arithmetic will quickly reason that for the umpteenth consecutive year, the BSQ on the exhibit floor was off the charts. The principle factor here is buzzword repetition, which drives the numerator toward infinity, while really genuine new ideas to pad the denominator are rare indeed.

Da BOMB
There is a lot to say about each of the major buzzwords and concepts that enlivened the NRF Expo. Right now let’s focus a little on “omni-channel retail,” which is recent nomenclature for an idea that has been around for quite a while. As far back as the dot-com boom in 1998 we began discussing the interplay between virtual and physical stores, catalogs, kiosks and call centers. By 2000 we identified several multi-channel players – like Eddie Bauer, and JCPenney – who had succeeded admirably (we thought then) in melding online, offline and catalog businesses to the benefit of shoppers.

The “shop anywhere, buy any where, return anywhere” principal was captured in the final edition of VStoreNews, where we labelled it “Broadband Merchant,” re-purposing a popular adjective. By then much of the industry had adopted “multi-channel” as the nom de jour.

At NRF this month, alot of folks were calling this “Omni-Channel,” I think because of the stunning influence of mobile technology within the mix. We can (and will!) argue long and hard about the appropriate understanding and application of mobile technology in retail, but for now let’s just stipulate that mobile is colossal in its influence. Explosive even.

Which is why I’d like to humbly offer an “omni” alternative. Call it BOMB retailing – Blend Online, Mobile & Bricks into a single entity where every channel shares a common information platform and consistent shopper interface. One brand, one shopper relationship, one inventory, one set of service standards, many moving touchpoints.

Surely after 14 years on the interweb machine, the omni-present, omni-channel, but hardly omniscient retail industry is ready to blow up the status quo.