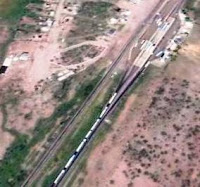 ELEVEN DAYS AGO I was a passenger in a van traveling south on Rte. 15 toward Hermosillo, Sonora, Mexico, when we came upon a sight that turned our heads and quieted our voices.

About 100 kilometers south of the border city of Nogales, Arizona, near the town of Benjamin Hill, Sonora, we spied a line of 18-wheelers stopped in the northbound lanes. They were waiting for inspectors in military uniforms to clear them for the trip further north.

The line of tractor-trailers stretched impressively into the distance, over the next rise. Several drivers lolled on the highway median waiting their turn. It had evidently been a long wait.

As we crested the hill, it became apparent that the line-up went much further. In fact, it took about 10 minutes at highway speed to pass all the idling trucks, each rise delivering another surprise; until finally we passed the last pair of truckers, standing in the weeds, checking their watches.

“That’s a lot of money sitting still,” I said to the man sitting next to me, who returned a serious nod.

We pressed on to our destination, the Sonora Spring Grape Summit, where it would turn out, that line of trucks would be a topic of some serious conversation for the growers, packers, importers, retailers and officials present.

Marco Antonio Camou, undersecretary of agriculture for Sonora’s state department of agriculture, who addressed the group, said the backup we had witnessed stretched for “16 or 17 kilometers,” causing delays of approximately 10 hours duration. (The satellite photo above shows the front of the queue on a recent day.)

Camou showed some photos of a just-completed security inspection facility on the highway designed to process 180 trucks per hour, using sophisticated x-ray machines and other gear. It was scheduled to open before the end of April, with a full-time complement of up to 180 Mexican military personnel barracked on the premises. Their primary mission: Find and stop contraband, especially drugs.

On our return trip north the next day, we passed a similar lineup and got a better view of the impressive-looking inspection station on the east side of the highway. Watching all those big wheels standing still made the little wheels in my head turn furiously. After my return to Tucson, I did some fact-checking and quick math:

If we assume each truck carries legitimate cargo valued at an average of $50,000, then we saw $43 million worth of goods sitting idle, for an average of 10 hours, adding a full day to the time of transport.

In other words, the line-up we witnessed added nearly $180,000 to the cost of goods moving through that inspection point. In one day.

Not to mention the unreported cost to Mexican taxpayers for construction and maintenance of the inspection facility, equipment and troops to man it.

Mind you, these internal security checkpoints (they are located on most major highways in northern Mexico) are in addition to the U.S. Customs inspection points the same trucks must pass at the border. The Mariposa station between Nogales, Sonora and Nogales, Arizona, reportedly handles almost 300,000 trucks crossing into the United States annually. All of them wait in line too. To try to improve this bottleneck on the U.S. side, a new facility expansion has been authorized here, at a cost of $200 million over the next 3-4 years.

For my new friends in Hermosillo who grow, pack and ship more than 10 million boxes of table grapes to American markets each spring, the improved inspection facilities should save time, money and product freshness. Sadly, the cost and complexity introduced by realistic security measures on both sides of the border is unavoidable and shared by all of us.