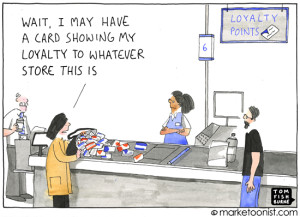 IF IT EVER WAS, it’s fading fast. I’m talking about shopper loyalty and the card-based frequent shopper programs that try to pass as loyalty builders.

I’ve long been a skeptic about the premise of customer loyalty. Card based programs are more about behavioral modification, segmentation and targeting. In many instances — airlines come to mind — the net result is the cultivation of dis-loyalty and skepticism, as a consequence of added complexity, suffocating rules, suspect prices and incentives that many users can never achieve.

Now comes news that the Kroger supermarket chain has begun converting its frequent shopper card holders to a smartphone app. This is news with big numbers behind it, as 96% of Kroger shoppers presently possess a card. Its personalized marketing subsidiary, dunnhumby, is surely driving this action.

This morning, the good folks at RetailWire.com asked its distinguished BrainTrust panelists: “Will Kroger’s App Replace its Loyalty Card?”  Here’s what I had to say about it:

Welcome to the post-loyalty era.

Card programs are not quite obsolete, but they are about to be absorbed by mobile apps. While a front-runner such as Kroger/dunnhumby may be able to convert many shoppers to its proprietary app for a while, the lasting future will be defined by electronic wallet solutions that aggregate frequent shopper plans, coupons and payments on the shopper’s terms. NFC communication with the POS will likely be a key enabling technology.

An observation: The pure value of of frequent shopper data is approaching its zenith. It now diminishes slightly in relative significance as the volume of social media interaction grows. This is the mind-bending next stage in behavioral-based marketing: Things people do, say and experience outside the store may soon eclipse what happens within the four walls.

For retailers that have steadfastly bucked the loyalty-card trend (like Walmart), this may be a moment of affirmation. Or maybe they just got lucky.