I HAD AN INVITATION recently to address an executive summit on Shopper Experience on the subject of In-Store Implementation. Regrettably, the event did not materialize, but the thought process it inspired could not be stopped. I decided to capture some of it here in the Tirades.

But first, are you experienced?

If you have ever shopped, of course you are. Shopper Experience is one of those big ideas that is hard to define because it encompasses everything we encounter in connection with a retail shopping visit. It begins with the traffic on the drive to the store, takes in the sights, sounds and smells of the store environment, and layers on the actions that take place while we are there. It probably even extends to the drive home and the interaction with purchased products.

Wikipedia defines it this way: “Customer experience is the sum of all experiences a customer has with a supplier of goods or services, over the duration of their relationship with that supplier. It can also be used to mean an individual experience over one transaction.” 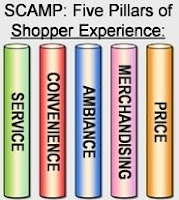 A large and complex construct, as the consumer behaviorists might say. To my mind, Shopper Experience cries out for a bit of de-construction. I took a crack at it.

As I see it we can break down the shopping experience into five “pillars” or components. Taking each in turn may make the whole concept easier to grasp for purposes of analysis. More importantly, it may lead us toward practical ways to improve the whole shopper experience by optimizing its elements.

My proposed five pillars of Shopper Experience are: Service; Convenience; Ambiance; Merchandising; and Price (SCAMP). I’ve thought about these pretty carefully and I believe this breakdown meets the MECE test. That is, they are mutually exclusive and collectively exhaustive. Each of the five pillars merits its own definition, and each encompasses much detail. For the purposes of the present post, let’s briefly define each:

Service. People, practices, policies, and the training that enables them. Top performing retailers excel at both hiring the right people and setting service practices that sustain and support their success.

Convenience. Both time-saving and effort-saving. Sometimes the line between time and effort may be blurred with other pillars – as when it takes too much effort to locate a desired product. Is that a merchandising problem?

Ambiance. Physical design of store environment, including lighting, spaciousness and other sensory cues like temperature, odors, and sound. And yes, other patrons figure into this experience pillar – we tend to like to shop with people like ourselves.

Merchandising. The product assortment; their arrangement on shelves or displays; all associated messaging designed to inform and persuade.

Price. Base or every-day pricing and store price positioning, of course, but also promotions and markdowns when they occur. Shoppers tend to form a relative price-value perception or price image for each retailer based on all these cues.

SCAMP is submitted for your consideration. I find it a useful first cut at analyzing Shopper Experience. Of course, each of the five pillars merits much more detailed discussion. That’s an opportunity for future Tirades.

THE TITLE OF THIS POST is meant as an homage to media sage Marshall McLuhan, whom I admire greatly as a thought leader regarding the impact of television, radio, print and film on the collective culture and consciousness of our society. I had the very good fortune to learn about the maestro’s work at the knee of his protege the late Dr. Neil Postman, professor of Media Ecology at New York University, when I studied there in the early 1980’s. I would encourage readers to look up books by both these great scholars. One can only imagine what they would have to say about the present state of blogging, text-messaging, and in-store digital media.

Their work has certainly influenced my own attempts to understand retail marketing and merchandising. In the early 1990’s, while working as managing editor of BrandMarketing magazine, I penned: “The retail store is a communications environment for brand messages.” This statement I believe captures the modern shopping experience at several levels, and it may help us confront and make sense of the incredible complex of messaging that takes flight at shoppers between the electric doors and the point-of-sale terminals every day.

Start by visualizing the 30,000 package labels in a modest sized supermarket – many of these multiplied by two, 10 or more facings into section and category tableaus. Add to those the shelf-talkers, aisle signs, price labels, floor graphics, coupon dispensers, shopping cart signs, and product displays that decorate stores and you begin to form a picture of the imposing gauntlet of competing attempts at persuasion that shoppers confront and navigate on a daily basis.

And that’s just the visual, static communications. Lighting, fixture design, even environmental systems all convey implicit and explicit messages aimed at influencing shopper behavior. Sales people cannot be overlooked as messengers of persuasion. Modern retail environments are also rife with electronic media of various stripes – from in-store audio and radio (“Attention Kmart shoppers…!) to a variety of interactive kiosks, and most interestingly of late, to networked video screens that display full-motion service and advertising content. These are often referred to as “in-store digital signage” because the folks that make the hardware (screens, switches, network gear) and software (media asset management systems) imposed their terminology on the emerging industry.

Two major influencers in the digital media trend, Walmart Stores and its supplier PRN Networks, originally dubbed their network, “Wal-Mart TV” – a metaphor that stuck, because after all, television monitors were used to display the content, and commercial time was sold to fund it. It seemed at first to mirror the classic advertising model favored by the television industry – audience reach, delivery frequency and wrap-around content. But don’t let the rectangular, glowing screen deceive you:

So the retailers, advertisers and marketers who are today struggling to press in-store media into the classic advertiser mold of reach, frequency, cost-per-thousand (CPM) and gross rating points (GRPs) are barely confronting the scope of the challenge before them. The in-store media measurement models we are newly hearing about don’t begin to tackle the really big issues that come along with the revolution in Shopper Media. What does the shopper see? What does she feel about it? What does he do about it? What do they do and feel about it later?

These questions impose a new discipline upon us, like it or not. It’s time to get busy on the basic shopper behavior and attitude marketing research that begins to shed some light on how people confront persuasive messaging in the retail environment. Only armed with this data will we be able to make reliable inferences about the value we assign to a delivered message. Counting “opportunities to see” is simply too crude for this complex, multi-shaded media environment.

I’ll have a lot more to say about this topic going forward. For the time being, let’s pause and consider how little we understand so far about digital media and the shopper experience – and how much of an opportunity lies before us.

AFTER A LONG, UNEXPLAINED HIATUS, here begins the next generation of Tenser’s Tirades.

Tenser’s Tirades is also the title of my first book, published 2001. You can still buy it on Amazon, and there’s a description and sample chapter and link on my business home page (just click on the VSN Strategies logo in the left column).

The original Tirades were a series of essays and commentary about dot-com retailing, written originally for my original e-letter, VStoreNews, and other industry publications. They were right a lot of the time, even when the so-called experts were missing the point in their analyses. This blog aims to extend that legacy, with fresh observations and critiques of current events in retailing and consumer product marketing.

Along the way, we’ll pick apart such phenomena as In-Store Implementation, Shopper Media, Category Management, Loyalty Marketing, Retail Technology, and the ongoing strategic decisions of industry leaders as they continually seek better and more profitable ways to go to market. You’ll be treated to my skewed view of all this, and my unabashed opinions.