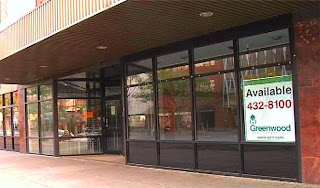 I RARELY VENTURE outside my core expertise in this blog for (justifiable!) fear of embarrassing myself and those close to me. But I’ve been watching an important societal trend from the sidelines with increasing concern. The topic is public education policy, and the lens through which I view it is the local school system here in Tucson, AZ.

Like I said – that’s a topic that would normally be out of my league. Better left to the experts. Or so I believed, until in a recent flash of insight I realized that our public schools have a retail problem.

Now there’s a subject area I know something about. Maybe in the next few paragraphs I can make a useful contribution to the national dialog on a very troubling issue. I doubt I could make things worse.

Education’s retail problem, in a nutshell, is what we in the stack-it-high-watch-it-fly business of selling stuff call over-storing. Over-storing occurs when retailers build too many buildings to offer goods to a finite number of shoppers. When the ratio of selling space to available dollars gets too high, all the stores suffer for a while, and eventually some go out of business until balance is restored.

This is easy to understand in terms of macroeconomics 101: Too many goods chasing too few dollars results in a lowering of demand.

Today we have a parallel situation in the world of public education due in part to national and local education policy, part due to the current economy, and part due to enduring human nature. The problem is especially acute this year here in Tucson, where there are too many classrooms chasing too few students, resulting in a lowering of demand. In fact, I’d nominate this city’s Tucson Unified School District (TUSD) as the nation’s poster child for over-schooling.

TUSD is presently battered by a perfect storm of negative trends, beginning with historically low funding per student (49th of the 50 states) and exacerbated by recent cuts due to the generally poor local economy. Teacher salaries are an embarrassment. There’s little money for textbooks or paper. Non-core subjects like music, art and P.E. have been largely eliminated. The Federal “No Child Gets Ahead” mandate has required further costly focus on teach-to-the-test classroom tactics.

Adding to this storm is Arizona’s status as the national hotbed of so-called “charter schools,” those privately operated institutions that operate by re-purposing per child state funds. These are often heaped with praise in Washington based on a persistent (but largely baseless) belief that charter schools introduce healthy competition to the educational system that will ultimately raise public school standards and benefit our children.

If there is one thing that TUSD has in profusion today, it is classrooms. The district operates more than 100 elementary, middle and high schools, plus several alternative schools, serving about 55,800 students, for an average of 558 students per building. That average is declining, as more students depart the district each year to attend local charter schools.

The result is some devastating math. Fewer students per school means declining revenues. but the same number of buildings to operate with fixed costs translates into a decline in net spending per student and a loss of classroom and non-classroom jobs.

This is a contributing factor in the elimination of non-core teachers and courses. Naturally, core classes must be preserved to meet state and federal standards. When teaching jobs are cut further, class size must increase, even if classrooms stand empty.

Another wrinkle has to do with exactly which families are shifting their students out of the public schools and into charter schools or other alternatives. Teachers I know observe that the parents who make this decision tend to be more involved with their children’s education and more likely to set high standards for their children. While the evidence is anecdotal, if true this amounts to a flight of the better and brighter away from the public schools. The unintended but devastating consequence of their departure is a lowering of average standardized test scores, evidence which is used to rate and reward schools and teachers.

This impact is demoralizing for teachers and alarming for parents, who respond by transferring more of their children into charter schools each term. But the district’s costs for owning and operating the buildings remain the same; more teacher jobs are lost each year; and the net spending per student continues to creep downward.

One obvious solution for an embattled district like TUSD, that would partially relieve the pressure on operating costs, would be to close some of its superfluous schools and consolidate the children into those that remain. In fact, closure of several smaller elementary schools has been proposed each of the past several years. Vocal local parent groups, who moved into those neighborhoods to be near these schools, successfully quashed these decisions.

Very recently we have heard news from the district of several proposed (and at least one actual) school mergers – whereby two half-empty elementary schools are combined into one with the superfluous building  shuttered. In the one announced instance so far, the parents of both schools voted in favor of the change. This is a bit like closing down one of several chain stores when the demographics shift – some business may be lost, but on the whole, the remaining units are more profitable.

So maybe TUSD got that part of the lesson. Lower costs begin with fewer buildings. Unfortunately, with state funding dropping even faster, this instance of economic realism will not be sufficient to forestall even more draconian cuts. How sad for our young people and the dedicated teachers who until recently believed they could make a difference in their lives.

1 thought on “The “Retail Problem” in Public Education”