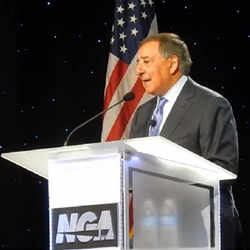 “THERE IS PROBABLY NO ISSUE more important today than cyber security,” said Peter Larkin, President and CEO of the National Grocers Association, in his remarks at the opening session of the annual NGA Show in Las Vegas, this week.

True to his word, the event’s educational program included three breakout sessions and one general session devoted to various facets of cyber security – from safeguarding POS and mobile payments; to protecting proprietary customer data; to defending the enterprise against malicious attacks; to whether insurance can offer useful protection.

Keynote speaker Leon Panetta, the former Secretary of Defense and Director of the CIA, said in response to an audience question that he could foresee the possibility of a “cyber Pearl Harbor” assault on American institutions and infrastructure. The siege is already well under way: The CIA was turning back some 100,000 cyber-attacks per day during his tenure from 2009-2011, he said. The pace has certainly accelerated since that time.